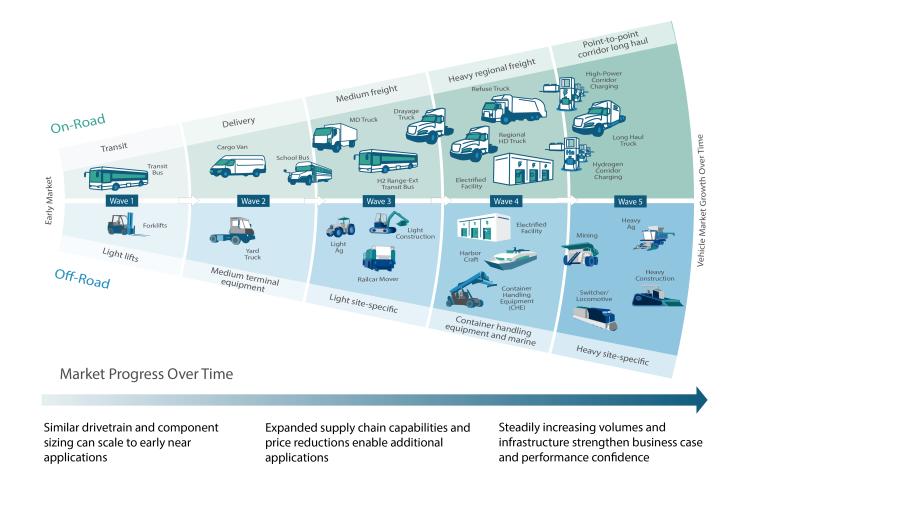 According to Jessie Lund, truck program manager at CALSTART, CALSTART’s beachhead strategy outlines the roadmap for the deployment of zero-emission technologies in even the largest off-road equipment segments.

CALSTARTa global non-profit organization focused on clean energy and transportation, has released the results of a new research project that provides a far-reaching technology and market assessment of zero-emission off-highway devices.

The analysis shows that the electrification of off-road equipment is progressing rapidly, with more than 200 electrified equipment models currently available in eight different off-road categories on the market.

Some categories such as light forklifts, airport ground equipment, yard trucks and transport refrigeration equipment are classified as technologically mature, so that only market barriers stand in the way of widespread use. In addition, technological advances in these segments are helping to transform the mining, rail, cargo handling, shipping and agriculture sectors.

Construction machinery is primed for the rapid growth of electrification. There are various reasons for this, including the compactness of many construction machines and the proximity of many construction sites to the electrical infrastructure required to charge these machines. For example, battery electric mini excavator sales accounted for 5 percent of the total US market in 2021 and is projected to account for 15 percent of the market by 2029.

In contrast, electrifying agricultural machinery is a much more difficult challenge, partly due to the need to work in remote locations.

Two of the most successful segments have been forklifts and underground mining equipment, where the use of electrified machines is already widespread because these machines must operate in enclosed environments where exhaust fumes are a health concern.

The report argues that mining companies need to electrify other equipment categories faster to meet the environmental goals they have set for themselves. It also points out that in addition to improving air quality and the associated health and financial benefits, mining electrification offers additional benefits from the elimination of exhaust fumes, such as: B. a higher torque in the low speed range, which offers a larger flow rate at low speeds.

In forklifts, on the other hand, the big story is the battle between lead-acid and Li-ion batteries. Currently the market is 80/20 in favor of lead acid. By 2030 it is projected to be 30/70 in favor of Li-Ion.

“In the future, the electrification of the largest off-road equipment will be a challenge. Still, significant progress is being made,” said Jacob Whitson, program manager at CALSTART.

“Some of the largest devices are produced in such small numbers that electrifying them may not be as difficult as initially thought. For example, Sandvik is launching a 65-ton battery-electric truck. The CALSTART beachhead strategy shows how advances in electrification are being made with smaller devices leading to electrification advances in larger machines faster than many realize.”

“CALSTART’s beachhead strategy outlines the roadmap for the deployment of zero-emission technologies even in the largest segments of off-road equipment,” added Jessie Lund, truck program manager at CALSTART.

“The bridgehead strategy is based on the concept that the development and continuous improvement of smaller electric machines will lead to rapid improvements in areas such as component performance or charging infrastructure improvements, which will then drive the entire market forward. For example, the market success of battery electric forklifts clearly paved the way for the next wave of zero-emission devices such as SUVs – a segment that is growing rapidly today.”